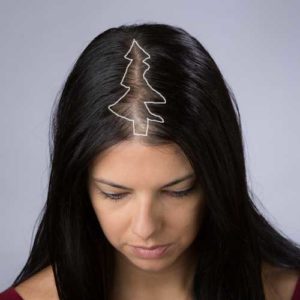 Almost every woman eventually develops some degree of female pattern hair loss (androgenetic alopecia). For most women, they tend to first notice it around menopause, but it can happen much earlier. The risk rises with age, and it’s higher for women with a history of hair loss on either side of the family. When hair begins to thin for women it will go through different patterns, one of which is called a Christmas tree hair loss pattern. The ‘Christmas Tree’ pattern was coined by a dermatology specialist, Dr. Elise Olsen because of the shaped area on the scalp from hair loss that is spreading in a women’s hair. The base of the tree is at the front of the scalp toward the face of the individual and the top of the tree is near the middle to rear of the head.

What is Female Pattern Hair Loss?
Women that suffer with a hereditary form of hair loss that is the most common hair loss condition is known as Female Pattern hair loss. Much like male pattern hair loss, it will begin to develop as you get older. For women that have this hair loss type, they are usually affected after the age of 40. With modern living and stress, some women can begin to lose their hair much earlier, even in their 20’s.

Men with hereditary hair loss ten to lose hair in specific areas like the crown, women often have thinning over most of the scalp and not just one area.

Female Hair Loss Patterns
The stages of female hair loss are classified using the Ludwig scale. It measures diffuse hair loss over the whole scalp rather than just a defined area. Type I refers to just minor thinning while type III is much more noticeable hair loss that covers the scalp.

The ‘Christmas Tree’ pattern is an in-between stage. This pattern equates toward the mid-stages of the Ludwig scale. The hair is often thinner towards the from so there is a widening or tapering which is why it takes on a look of a Christmas tree.

Treating Female Pattern Hair Loss
Female pattern hair loss is often a treatable condition. At Invisions of Connecticut we have help thousands of women that suffered from hair loss with our Trichologist and scalp health treatments.

If the hair loss is not treated it will become more difficult to boost hair growth and minimize the hair that is lost. Taking action as soon as you notice your hair is thinning can result in a better chance of any treatment reversing and stopping hair loss.